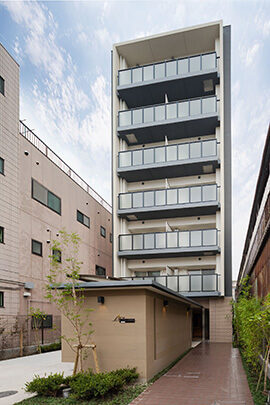 When I decided to rebuild my Apartment building that my father built over 50 years ago, the first thing that came to mind was the sight of many people being forced to live in shelters after the Great East Japan Earthquake. I thought, ‘what if my family or my tenants were in such a situation?’ When considering the hardship and burden of having family members that are difficult to evacuate such as elderly relatives or infants, I thought modern day apartments need a high level earthquake resistance that allows you to take refuge while at the same time enabling you to live your life in your home without needing to go to a shelter.

Earthquake resistance, however, means different things to different companies. I also considered base isolation to cope with earthquakes by absorbing vibrations. However, because future large earthquakes in Tokyo are predicted to bring strong vertical shaking, I chose Takamatsu Corporation’s earthquake-resistant structure, which had a proven track record of not suffering damage in the Great Hanshin-Awaji Earthquake, which was a major epicentral earthquake. The buildings they constructed are incredibly strong and remain livable even after a major earthquake. I also wanted the property to be fitted with technology that is “the safest available today” because we cannot predict what kind of disaster will happen in the future. For this reason, we aimed for the highest earthquake resistance grade.

The importance of water is also something I felt strongly after the Great East Japan Earthquake. This is why we established an emergency storage warehouse in preparation for disasters that stores over 1 ton of drinking water at all times. We also installed an emergency well that can be used as household water for toilets, etc. I thought that tenants are likely to have food and so on, and so it is my responsibility as the owner to secure water, which is an essential utility. The residents of our apartment are mainly young families, and therefore water is also needed to make baby milk. In anticipation of any such disaster, we have also stockpiled portable gas stoves, generators, and toilet paper. For the safety of the next generation as well, I want to look after this robust building as well as the lives of families and tenants.

I met with the client right after the Great East Japan Earthquake. The client, who was worried about the property shaking under an earthquake, initially considered a building with a quake-absorbing structure. Therefore, based on our experience of the Great Hanshin-Awaji Earthquake, etc., we proposed a building that will serve as a refuge area for the community by acquiring the highest earthquake resistance grade, grade 3, as well as digging a well. The client agreed with the details of the proposal and selected us.

After we handed over the property and the client moved in to his new home, he said the following to me: “I’m glad I asked Takamatsu Corporation to do this job. I’m glad I chose you Isono. Thank you.” These few words made this job worthwhile for me as I had little sales experience at the time and I did not have much confidence in doing the job. It was a few words that made me want to keep striving to give my best. I hope that we can continue to help our clients’ businesses succeed and bring happiness.
Sales representative: Isono