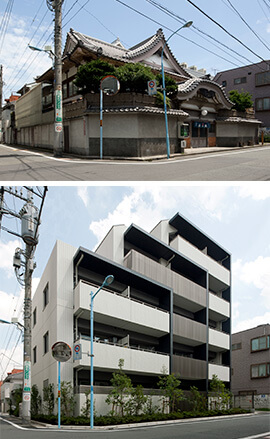 Comparison of public bathhouse and
apartments before and after rebuilding

Meanwhile, I received a proposal from Takamatsu Corporation about rental apartment business.
Takamatsu Corporation made their proposal after taking full consideration of market research results, tax measures, financing, future business potential and other such factors. Most importantly, their proposal included reuse of the bathhouse's interior spaces so that the history and memories of the original business would remain. I was convinced by everything in their proposal and made the decision to transform my business.
All units in the apartment were occupied upon completion of the property. This meant I now had more personal time and a stable income, making those hectic days seem like a thing of the past. I learned the importance of making the most of assets inherited from my predecessors in a way that tailors them to my generation.

When I heard that the owner took care of the carp in the pond at the existing public bathhouse, I expressed to have the pond in the plan layout of the site when drawing up the proposal. The position of the pond was relocated from its previous location and was newly constructed, but it can be seen from the adjacent homes and the pond environment has also been improved. Together with the rebuilding proposal for the apartment, we received high praise for the proposal from the outset. It appears that the pond was one of the decisive factors in Takamatsu Corporation winning the bid over the proposals of other companies.
Sales representative: Fukuda